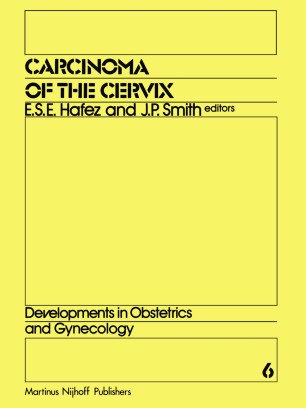 Carcinoma of the Cervix

Part of the Developments in Obstetrics and Gynecology book series (DIOG, volume 6)

Various scientific evaluations taken from these chapters were presented during the international symposium, 'Carcinoma of the Cervix,' which was held from September 4-7, 1980 in Kiawah Island, Charleston, South Carolina, U.S.A. An international selection of research investigators have contributed reviews designed to be informative to medical, graduate and post-graduate students, as well as clinicians, oncologists and investigators working in the area of female carcinoma. An attempt has been made to provide a total coverage of current progress in carcinoma of the cervix. In particular, the following major areas are included: Epidemiology, Histology & Histochemistry, Ultra­ structure, Physiology & Biochemistry, Genetics & Cytogenetics, Immunology, Diagnosis, and Patho­ physiology & Complications. Major changes have occurred in incidence and mortality rates for carcinoma of the cervix in the past decade. Mass screening programs and their ability to detect earlier stage diseases have attributed to a reduction in invasive diseases. Most cervical cancers could be prevented by an extension of cytologic screening programs in high risk areas. Greater resources must be provided to reach high risk areas in order to prevent the occurrence of cervical cancer.