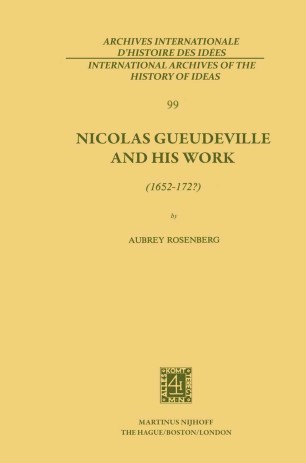 It is generally agreed that great men transcend their time while ordinary men remain rooted in it. This is why, if we want to know what life was like in days gone by, we must study those who were most representative of their age, those individuals who, though they may have achieved a modicum of fame or notoriety, are now, because of their limited abilities and outlook, largely forgotten. The great figures involved in the political and religious controversies that took of the seventeenth century and the beginning place in Holland! towards the end of the eighteenth, men such as Bayle, Jurieu, Le Clerc and others who were in the forefront of what has been aptly termed as the "crise de la conscience europeenne," these figures have been the object of extensive investigation. The minor personages of this period, on the other hand, have received little attention. For this reason, in a previous study,2 I examined the life and work of one of these minor figures, and tried to show how he was representative of those French Huguenots who came to Holland in the latter half of the seventeenth century, who settled in relatively remote places, and who made an effort to integrate themselves and gain acceptance in Dutch provincial society.