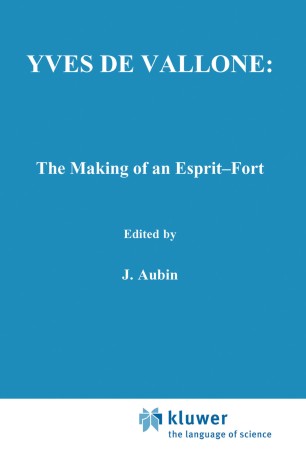 Yves de Vallone: The Making of an Esprit-Fort

The writing of the second part of this book presented a peculiar difficulty. On the one hand I had the great advantage of having found the first rough draft of the manuscript La Religion du Chretien, corrected and often recorrected. Authorship could eventually be established beyond shadow of doubt, and in the corrections one could see de Vallone changing his opinions as he wrote. On the other the sheer length of the manuscript - about 140,000 words - plus the num­ ber of corrections - well over 3,000, many of them lengthy - the enormous number of references in the text to the Classics, to the Scriptures and Apochrypha, to the Fathers, to Philosophers, ancient and contemporary or near contemporary to de Vallone, and to a considerable number of other contem­ porary authors, all of which would require a footnote (not to speak of other footnotes necessary as comments on the text itself) made the production of a critical edition a financial impossibility. Instead I decided, for the sake of scholars interested in this type of manuscript, to give a full, i. ndeed meticulous­ perhaps too meticulous - digest of the manuscript with a running commentary, showing the influences working on de Vallone, the intellectual atmosphere in which he lived, indicating the significance of all the major revisions and correc­ tions in his text and commenting on what one can only describe as his own world-theory and on his use of his authorities and of their influence upon him.