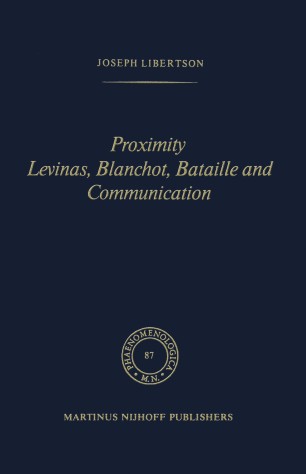 The problematic reality of an alterity implicit in the concept of communication has been a consistent attestation in formal discourse. The rapport of thought to this alterity has been consistently described as a radical inadequation. By virtue of the communicational economy which produces discontinuity and relation, illumination and the possibility of consciousness, an opacity haunts the famili­ arity of comprehension. Consciousness' spontaneity is limited by the difference or discontinuity of the exterior thing, of the exterior subject or intersubjective other, and of the generality of existence in its excess over comprehension's closure. An element implicit in difference or discontinuity escapes the power of comprehension, and even the possibility of manifestation. Within the system of tendencies and predications which characterizes formal discourse, however, this escape of alterity is most often understood as an escape which proceeds from its own substantiality: the unknowable in-itself of things, of subjects, and of generality. Alterity escapes the power of comprehension, on the basis of its power to escape this power. That which escapes the effectivity of consciousness, escapes on the basis of its own effectivity. For this reason, the rapport of inadequation described by the escape may function in formal discourse as a correlation. The inadequation of comprehension and exteriority may function as the vicissitude of a larger adequation. The latent principles of this adequation are power and totalization.