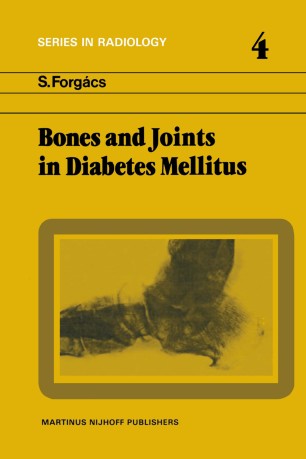 Bones and Joints in Diabetes Mellitus

Part of the Series in Radiology book series (SERA, volume 4)

Complex disorders of the carbohydrate metabolism and associated complications cause many abnormalities detectable by radiography in the bones and joints. Mild clinical symptoms associated with very severe radiological changes were first rec­ ognized in relation to the gastroenterologic complications of diabetes. This phenomenon is more frequent in the skeletal system. For example, mild and painless swelling of the foot joints may often mask extremely severe bone destruction. Several other bone changes associated with diabetes are only detectable by radiography. Thus, the radiologist plays an important role in confirming these diabetic complications, furthermore he is involved in the therapeutic management of the patient. Although many details on this subject have been published, however no summarizing monograph has yet appeared. Manuals discussing diabetes include only short reviews on complications of the osseous system. The fact that the incidence of diabetes is very high, at present 1 %-2 % of the population is affected and their number is gradually increasing - dis­ plays the timeliness of this subject. Fifty years of experience with insulin therapy indicates that several important problems still remain to be solved. Insulin and modern oral antidia­ betic drugs proved extremely efficient in the management of hyperglycemia and ketosis, but the incidence of other complications has not decreased. Moreover, as the number of diabetics and their life expectancy increase, late complications become likewise more fre­ quent. Diabetic osteoarthropathy is one of these complications.