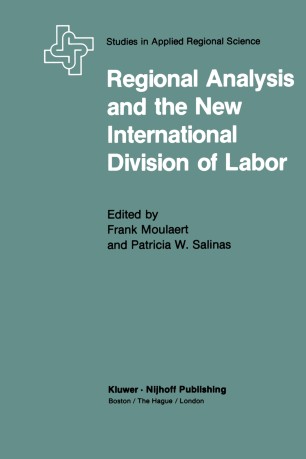 Regional Analysis and the New International Division of Labor

Applications of a Political Economy Approach

Throughout the world, a sense of crisis has settled in like a nightmare that refuses to leave. We look towards the horizon with apprehension. Major changes are afoot. Older industrial regions, once rich and powerful, stand by helplessly as factories close down. Poor countries are sliding into bankruptcy, unable even to feed their populations. In a few scattered enclaves, called ex­ port platforms, new manufacturing plants spring up overnight: they employ predominantly young, unmarried women and ship their products to unknown destinations overseas. Small companies are eaten up by bigger ones which, in turn, are absorbed by still larger conglomerates. Some industrial sectors are wiped out altogether. Tensions between states are increasing. More and more countries are coming under military rule. Torture and terrorism are turned into tools of official state policy. Civil wars are fought in Central America, Northern Africa, and Southeast Asia. International conflict flares up be­ tween Britain and Argentina, Iraq and Iran, Ethiopia and Somalia. Economic growth has slowed to a crawl. Inflation undercuts the livelihood of the poor. The small producer is ruined. It appears that we are involved in a major restructuring of the capitalist world. The problems are profits, capital accumulation, and efficiency in pro­ duction. To make the indicators point up, whole regions are sacrificed, new technologies are put in place, and new locational patterns are created as the world is carved up into a new international division oflabor.