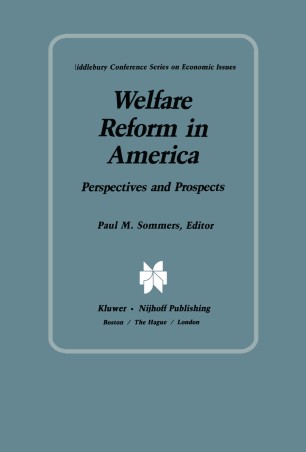 This is the second in a series of books growing out of the annual Mid­ dlebury College Conference on Economic Issues. The second confer­ ence, held in April 1980, focused on goals and realities of welfare reform. The objectives of the conference were threefold: (1) evaluation of the antipoverty effort so far; (2) discussion of welfare reform alternatives; and (3) prediction of how new initiatives would change work behavior and productivity. During the time this country has been engaged in a "war on poverty," two massive efforts to reform welfare, Richard M. Nixon's Family As­ sistance Plan (FAP) and Jimmy Carter's Program for Better Jobs and Income (PBJI), were proposed. Both defined national benefit levels and featured a negative income tax. Both measures were defeated in Congress. More modest efforts at reform have, however, changed the economic landscape. Because of the rapid growth in cash and in-kind transfer programs, income poverty is no longer the serious problem that it was in 1964. In fact, looking at the proliferation of programs and the substantial surge in participation rates, some politicians have even advocated a period of government retrenchment. In 1971, the governor of California vii viii INTRODUCTION proposed (and implemented) a major welfare reform in an attempt to stem the rapid growth of welfare caseloads that began in his state in 1967-68. He argued that savings from administrative improvements could be used to raise benefits for the "truly needy.