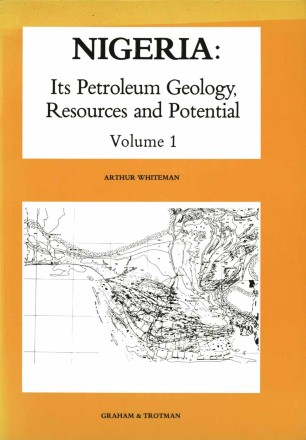 At attempt is made here to provide a comprehensive The Basement "massifs" roughly delimit the main account in book form of the Petroleum Geology of sedimentary areas of the: Nigeria, a country which in 1979 was the world's 1. ABAKALIKI, BENUE, GONGOLA AND YOLA sixth largest oil producer and rated the twelfth gIant TROUGHS petroleum province of the world by Ivanhoe (1980) 2. BIDA OR MIDDLE NIGER BASIN in terms of known recoverable resources (cumulatIve 3. SOKOTO EMBAYMENT OF THE IULLEM­ production + proven + probable reserves) of oil and MEDEN BASIN 4. BORNU-CHAD BASIN gas. . 5. DAHOMEY BASIN Nigeria, which has been an indepe. ndent sovereIgn country since 1960, faces the AtlantIc Ocean on the These basins and troughs, taken together with the south, is bounded by the Peoples' Republic of Benin onshore part of the Nigeria Delta Complex, occupy (ex-Dahomey) on the west, by the Republic of Niger about 178 000 square miles, half the total area of and by the Sahara on the north, the Republic of Chad Nigeria. Figure 3 shows the area of Nigeria in com­ on the northeast, and is bounded by the Umted Re­ parison to areas of other well known petroleum public of Cameroun on the east. It now consists of provinces and units, such as the Gulf. Coast of. the 19 states organized in a federation and, largely be­ United States, North Sea etc.