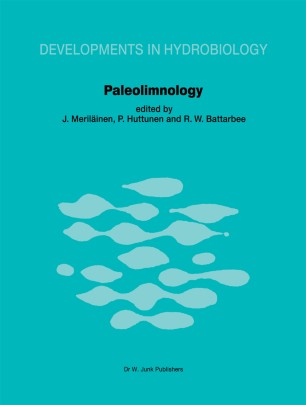 Proceedings of the Third International Symposium on Paleolimnology, held at Joensuu, Finland

Part of the Developments in Hydrobiology book series (DIHY, volume 15)

The Third International Symposium on Paleolimnology was held at the beginning of September 1981 in Finland. After registration at the University of 10ensuu and the opening session and welcome reception in the Town Hall, the participants moved to a hotel at Koli, a hill famed as a landmark and for its panoramic view. Here the lecture session, lasting four days, took place. Momentarily, the mosaic of the lakeland became visible between the clouds showing the hill slopes covered by mature spruce forest and scattered old birch trees, a reminder of the last slash-and-burn phase some 130 years ago. Altogether 120 paleolimnologists participated in the meetings and most also attended one of the two post-symposium excursions to the Arctic Circle and to South Finland. The lectures covered a wide range of paleolimnological subjects. The main topics, however, included current aspects in the dating of sediments and the history of eutrophication. The symposium was advised by the international organizing committee under the presidency of Professor Edward S. Deevey. Other members present at Koli were Dr. Maj-Britt Florin, Dr. Heikki Ignatius, Prof. Heinz Lamer, Prof. Gerbert Martinson and Dr. Magdalena Ralska-lasiewiczowa. They also gave direction to a discussion on future plans for international activity in paleolimnology. Later in the autumn, after the end of the symposium, the partici­ pants sent special thanks to the secretaries, Mrs. Eija Merilainen, Mrs. Tuula Nylander and Mrs. Anita Toukomaa, for solving individual problems during the symposium with smooth and rapid efficiency.