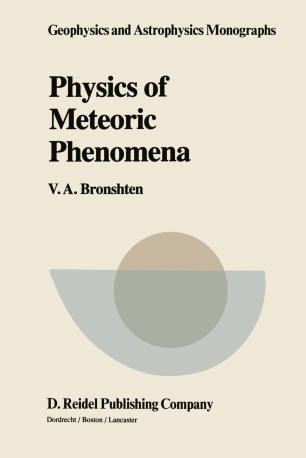 "Meteoric phenomena" is the accepted term for the complex of physi­ cal phenomena that accompany the entry of meteoric bodies into the at­ mosphere of the earth (or of any planet). "Meteoric bodies" are usually defined as cosmic bodies observed by optical or radar techniques, when they enter the atmosphere. The limiting sensitivity of present-day radar equipment makes it possible to record meteors of up to stellar magnitude +14, while the most brilliant bolides may reach magnitude -19. On a mass 7 7 scale this corresponds approximately to a range of 10- to 10 g. How­ ever, met~or astronomy is also concerned with larger objects, namely crater-forming meteorites, or objects that cause large-scale destruction when they arrive through the atmosphere (an example is the Tunguska River meteorite). Consideration of the interaction of such objects with 12 the terrestrial atmosphere extends the mass range to 10 g. On the other hand, scientists studying fragmentation processes in meteoric bod­ 7 ies have to consider particles with masses less than 10- g, and the use of data from meteoric-particle counters on rockets and artificial satel­ lites, from microcraters on the lunar surface, and from noctilucent clouds 12 lowers the minimum mass to 10- g. Therefore, the mass range of meteoric bodies, or meteoroids, encompasses 24 orders of magnitude. Although recent years have witnessed considerable development in meteor research, both in the Soviet Union and elsewhere, the main mono­ graphs on meteor physics were published twenty or more years ago.