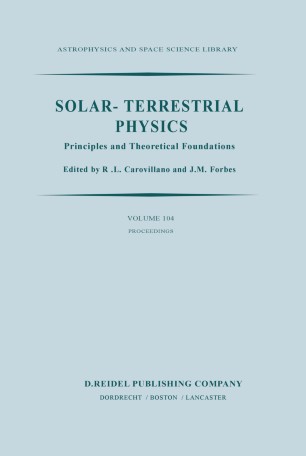 Principles and Theoretical Foundations Based Upon the Proceedings of the Theory Institute Held at Boston College, August 9–26, 1982

The Theory Institute in Solar-Terrestrial Physics was held at Boston College 19-26 August 1982. The program consisted of a two-week School followed by the first theory conference in the field. This book is based upon the lectures presented at the School. Several years ago there was a convergence of efforts to promote the role of theory in space plasma physics. Reports from the National Academy of Sciences and NASA advisory committees documented the disciplinary maturity of solar-terrestrial physics and recommended that theorists play a greater role in the continued development of the field. The so-called theory program in solar-terrestrial physics was established by NASA in 1979 and implemented in accordance with the guidelines set forth by a panel of scientists, primarily theorists, in the field. The same panel motivated the Boston College program. Published proceedings of the school would provide curricular materials for the training of graduate students in solar-terrestrial physics. J.M. Forbes, T.E. Holzer, A.J. Hundhausen, A.D. Richmond, and G.L. Siscoe were the principal architects of the curriculum of the School, and I am grateful for their contributions. Each also lectured at the School. The chapters in this book were prepared by the authors themselves with one exception. The chapters by Parker are edited reproductions of his lectures. Unfortunately, it is our loss that the lectures of Holzer and Hundhausen are not included in the book.