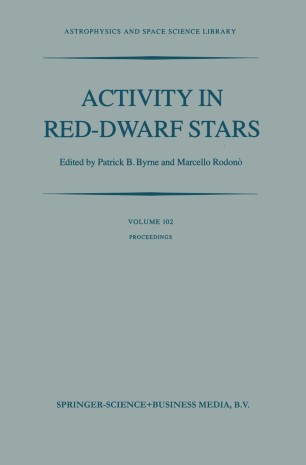 Proceedings of the 71st Colloquium of the International Astronomical Union Held in Catania, Italy, August 10–13, 1982

IAU Colloquium No. 71 had its immediate origins in a small gathering of people interested. in the optical and UV study of flare stars which took place during the 1979 Montreal General Assembly. We recognized that a fundamental change was taking place in the study of these objects. Space-borne instruments (especially lUE and Einstein) and a new genera­ tion of ground-based equipment were having a profound effect on the range of investigations it was possible to make. To extract maximum benefit from these new possibilities it would be necessary as never before to have good communication with colleagues in other disciplines, for instance,. with atomic and solar physicists. Similarly, studies of phenomena associated with the outer atmospheres of the late-type stars could now hope to give significant insights into certain aspects of solar activity. So, in view of the wide range of backgrounds of those participating, the meeting had an unusually high proportion of invited reviews while most of the contributed papers were presented as posters. It is gratifying that in the short time since the meeting a good deal of correspondence has been received from participants remarking on the success of this format. Once the decision had been taken in principle to hold the meeting, a very considerable amount of work fell on the two organizing committees, viz. the Scientific and Local Organizing Committees. The Scientific Organizing Committee was chaired by D.J. Mullan and consisted of A.D.