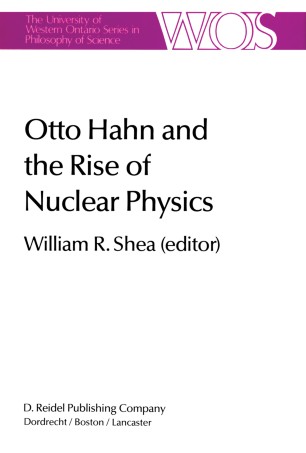 Otto Hahn and the Rise of Nuclear Physics

Part of the The University of Western Ontario Series in Philosophy of Science book series (WONS, volume 22)

and less as the emanation unden\'ent radioactive decay, and it became motion­ less after about 30 seconds. Since this process was occurring very rapidly, Hahn and Sackur marked the position of the pointer on a scale with pencil marks. As a timing device they used a metronome that beat out intervals of approximately 1. 3 seconds. This simple method enabled them to determine that the half-life of the emanations of actinium and emanium were the same. Although Giesel's measurements had been more precise than Debierne's, the name of actinium was retained since Debierne had made the discovery first. Hahn now returned to his sample of barium chloride. He soon conjectured that the radium-enriched preparations must harbor another radioactive sub­ stance. The liquids resulting from fractional crystallization, which were sup­ posed to contain radium only, produced two kinds of emanation. One was the long-lived emanation of radium, the other had a short life similar to the emanation produced by thorium. Hahn tried to separate this substance by adding some iron to the solutions that should have been free of radium, but to no avail. Later the reason for his failure became apparent. The element that emitted the thorium emanation was constantly replenished by the ele­ ment believed to be radium. Hahn succeeded in enriching a preparation until it was more than 100,000 times as intensive in its radiation as the same quantity of thorium.

`...articles which provide much interesting material on a period of the development of physics which has been relatively neglected by historians of science.'
Centaurus, 28:1