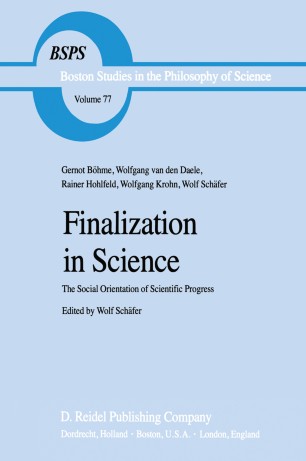 The Social Orientation of Scientific Progress

Part of the Boston Studies in the Philosophy of Science book series (BSPS, volume 77)

These essays on Finalization in Science - The Social Orientation of Scientific Progress comprise a remarkable, problematic and controversial book. The authors propose a thesis about the social direction of scientific research which was the occasion of a lively and often bitter debate in Germany from 1976 to 1982. Their provocative thesis, briefly, is this: that modern science converges, historically, to the development of a number of 'closed theories', i. e. stable and relatively completed sciences, no longer to be improved by small changes but only by major changes in an entire theoretical structure. Further: that at such a stage of 'mature theory', the formerly viable norm of intra-scientific autonomy may appropriately be replaced by the social direction' of further scientific research (within such a 'mature' field) for socially relevant or, we may bluntly say, 'task-oriented' purposes. This is nothing less than a theory for the planning and social directing of science, under certain specific conditions. Understandably, it raised the sharp objections that such an approach would subordinate scientific inquiry as a free and untrammeled search for truth to the dictates of social relevance and dominant interests, even possibly to dictation and control for particularistic social and political interests.