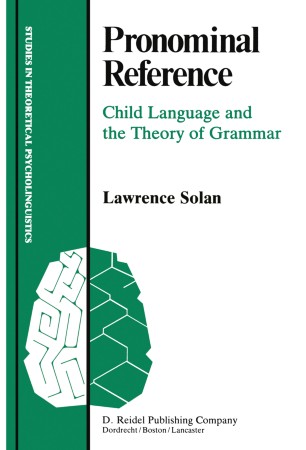 Child Language and the Theory of Grammar

Linguistic theory has seen a substantial shift in focus during the past decade. Whereas early research in generative grammar sought descriptive adequacy through the proliferation of transformational rules, recent efforts have concentrated on defining systems of principles that restrict the application of a greatly simplified sys­ tem of rules of grammar. These principles, because of their broad application within a particular language, and their appearance in a wide range of languages under investigation, are claimed to reflect innate cognitive structures often termed universal grammar. Accompanying this new, and very interesting research in linguis­ tic theory is an interest in certain aspects of the language acquisi­ tion process that relate to the theoretical claims. As new insights allow us to hypothesize both more specifically and more plausibly about linguistic universals, the actual facts about linguistic develop­ ment in young children become increasingly relevant as additional data on which to formulate and test new ideas. This book looks closely at a particular set of linguistic structures with respect to both linguistic theory and language development, exploring the relationship between the theoretical claims and the results of a series of language acquisition experiments. Although work of this sort is often called interdisciplinary, the issues addressed are clearly defined, although not all of them are answered. This book should be of particular interest to linguists, and to psychologists concerned with linguistic and cognitive development.