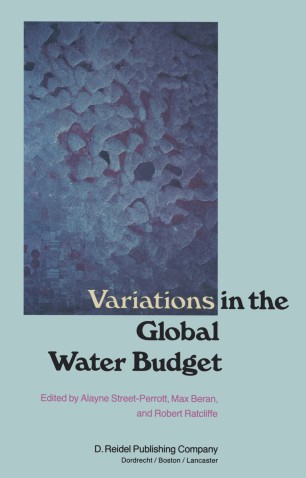 Variations in the Global Water Budget

R.E. Newell President, International Commission on Climate International Association of Meteorology and Atmospheric Physics Water is the active ingredient in the global climatic system, its physical properties ensuring that it plays a major role. Its high thermal capacity provides a mechanism for moderating mid­ latitude winter temperatures; solar energy is absorbed by the surface layers of the middle latitude oceans in summer and is released to the atmosphere in winter as the ocean cools. The variation of saturation vapour pressure with temperature is the factor which causes oceanic surface temperatures at low latitudes to be limited by evaporation to values near 29°C, thereby limiting tropical marine air temperatures to about the same value. The substantial amount of energy involved in phase changes - the latent heat - governs the passage of solar energy to the atmo­ sphere; visible solar radiation is absorbed at the Earth's surface, energy is supplied to evaporate water and the latent heat is released to the atmosphere when and where condensation occurs, which is often a considerable distance from the source of the moisture. The infrared radiative characteristics of water vapour, namely the broad vibration-rotation bands typical of a triatomic molecule, permit it to act as the principal agent of energy loss from the atmosphere, throu?,h infrared radiation to space.