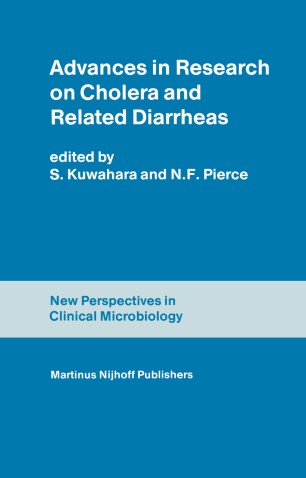 Advances in Research on Cholera and Related Diarrheas

The United States-Japan Cooperative Medical Science Program was initiated in 1965 by joint agreement between the President of the United States and the Prime Minister of Japan. The purpose of the Program was to promote cooperative biomedical research between the two countries, especially on health problems of recognized impor­ tance in Asia. Cholera was designated as one topic of mutual interest. Panels of scientists from each country were formed, and these met to select priority areas for research. The Cholera Panels initially defined two major goals: 1) improved and simplified therapy for cholera, and 2) better methods for immunization. Progress in the pursuit of these goals led to the recognition that bacteria other than Vibrio cholerae are also important causes of acute dehydrating diarrhea which resembles cholera in its manifestations and patho­ genesis; most notable among these are enterotoxinogenic strains of Escherichia coli. Accordingly, panel guidelines were expanded to include all diarrheal diseases that involve fluid loss caused by an enterotoxin. More recently, studies have shown that vibrios, including V. cholerae, have a distinct environmental life cycle that is probably an impor­ tant factor in the epidemiology of vibrio infections. For this reason, the panel guidelines were again expanded to include studies on the environmental ecology of vibrios. A major project of the Joint Cholera Panels has been the organization and spon­ sorship of an annual conference on cholera and related diarrheal diseases.