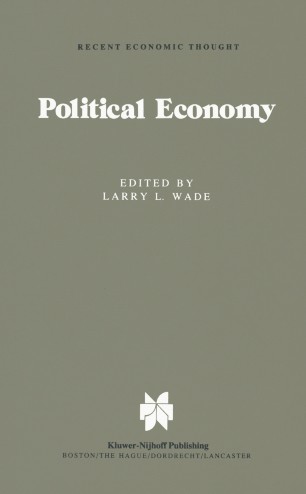 This volume contains original essays by outstanding scholars working within several of the dominant genres in contemporary political economy: neoclassical public finance, public choice, and Marxian analysis. Critical overviews of some of their major themes are offered in my introductory chapter and in Warren J. Samuels' concluding one, while more focused, if briefer, comments by other scholars follow each of the theoretical presen­ tations in chapters 2 through 4. The book's aim is to alert, inform, and possibly provoke readers to a more careful examination of the important and manifold problems of theory and analysis raised by authors whose points of entry into the subject of political economy often differ substan­ tially. At a time when problems of economic performance and political management frequently seem to have become not only severe but intrac­ table, it is not unwise to consider again the ways in which greater sense might be made of these crucial matters. The book's dialectical organization is intended to encourage readers to consider insights and objections that may not have been otherwise appar­ ent and, hence, to reflect in a more critical fashion upon the limitations and advantages of various visions in this complicated and sometimes disorderly field. Since I am of the opinion that no fully satisfactory syn­ thesis of the perspectives presented here is (probably ever) possible, no Procrustes has been summoned to make the attempt.