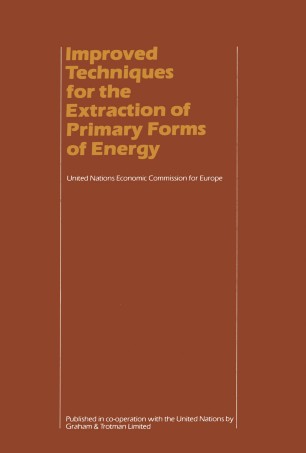 Improved Techniques for the Extraction of Primary Forms of Energy

The Seminar on Improved Techniques for the Extraction of Primary Forms of Energy was organized by the United Nations Economic Commission for Europe (ECE) and held at Vienna from 10 to 14 November 1980 at the invitation of the Austrian Government.* Mr. H. Sparker, a Director of the Austrian Mineral-Oil Administration (OeMV) , was elected chairman of the seminar. Mr. V. Zanchev (Bulgaria), Mr. J. Medaets (Belgium) and Mr. S. Doleschall (Hungary) were elected chairmen of working meetings 1, 2 and 3 respectively. At the invitation of the Austrian Mineral-Oil Administration (OeMV), the parti­ cipants inspected the steam-injection installations in the Maustrenk and explora­ tory fields and the oil and gas production facilities in the north Vienna basin. In a statement on behalf of the Austrian Government at the opening meeting, Mr. A. Nussbaumer, Secretary of State, emphasized that remedies for the difficult energy situation depended in the long run on the contribution of scientific and technical research; whence the significance of the seminar. Efforts now in progress must be directed towards more rational use, by means of existing or new techniques, of proved resources of fossil fuels. The participants would, he hoped, devote their discussions to more effective technologies which would enable the recovery factor to be improved with fewer repercussions on the environment. Austria in general, and its Alpine regions in particular, were "rich in poor mineral deposits", and consequently public undertakings, universities and industrial research institutions had a very real interest in the seminar's work.