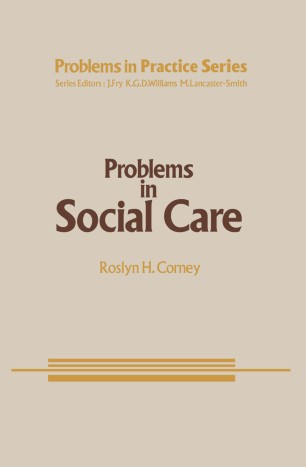 This book has been written primarily for general practitioners; it describes the social problems which are presented by patients to their doctors for help and advice. The aim of the book is to help the doctor manage these problems, both through his own interventions and by involving or referring the patient on to other agencies. While the more common problems have been considered in detail, those rarely encountered have been omitted. The book also concentrates on help available from non-medical sources, as these will be less familiar to the general practitioner than other medical or nursing services. There is often a close association between social difficulties and health problems, both physical and psychiatric. It is, there­ fore, vital that an attempt is made to meet the social needs of patients in order to promote good physical and mental health. R. H. Corney 8 Series Foreword This series of books is designed to help general practitioners. So are other books. What is unusual in this instance is their collect­ ive authorship; they are written by specialists working at district general hospitals. The writers derive their own experi­ ence from a range of cases less highly selected than those on which textbooks are traditionally based. They are also in a good position to pick out topics which they see creating difficulties for the practitioners of their district, whose personal capacities are familiar to them; and to concentrate on contexts where mistakes are most likely to occur.