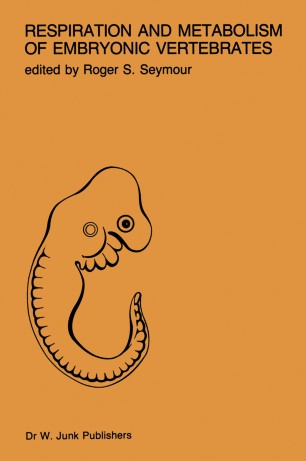 Respiration and metabolism of embryonic vertebrates

The papers in this volume were presented at an international symposium, held in South Australia on September 8-10, 1983. The purpose of the meeting was to present the comparative physiology of gas exchange, water balance and energet­ ics of developing vertebrate embryos. contributions were invited from leading research workers in an attempt to represent the forefront of investigation of all vertebrate classes and to promote a broadly comparative approach to the study of embryonic physiology. These proceedings therefore reflect the current level of research activity focus­ ing on each group of vertebrates. While considerable expansion and specializa­ tion has occurred in the area of avian embryos over the last decade, work on reptilian embryos is less developed and that on fish and amphibians is still in its infancy. Although a great deal is known about respiration and metabolism in embryos of placental mammals, the physiology associated with the curious mode of development of monotreme and marsupial embryos has not been examined until recently. In this symposium. the well-studied vertebrate classes are repre­ sented primarily by specific research papers that document original work. These are balanced by more extensive reviews of the lesser known classes.