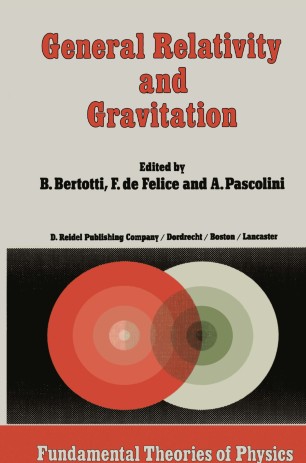 The Tenth International Conference on General Relativity and Gravitation (GR10) was held from July 3 to July 8, 1983, in Padova, Italy. These Conferences take place every three years, under the auspices of the International Society on General Relativity and Gravitation, with the purpose of assessing the current research in the field, critically discussing the prog­ ress made and disclosing the points of paramount im­ portance which deserve further investigations. The Conference was attended by about 750 scientists active in the various subfields in which the current research on gravitation and general relativity is ar­ ticulated, and more than 450 communications were sub­ mitted. In order to fully exploit this great occur­ rence of experience and creative capacity, and to pro­ mote individual contributions to the collective know­ ledge, the Conference was given a structure of work­ shops on the most active topics and of general sessions in which the Conference was addressed by invited speakers on general reviews or recent major advance­ ments of the field. The individual communications were collected in a two-volume publication made available to the participants upon their arrival and widely distributed to Scientific Institutions and Research Centres.