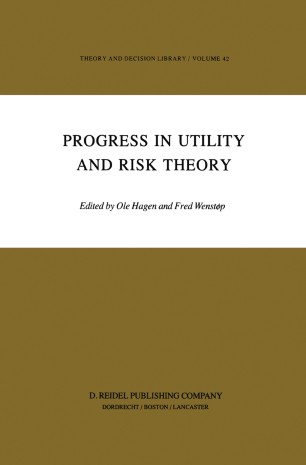 Progress in Utility and Risk Theory

1. PROGRESS IN UTILITY AND RISK THEORY At the First International Congress of Utility and Risk Theory in Oslo 1982 (FUR-82) it appeared to be a widespread feeling among the participants that the conference signalled something like a paradigm shift in the field. This does not necessarily mean that old truths were discarded and replaced by new ones, but rather that new theories and new empirical evidence were brought forth, compelling old theories to be critically analyzed from new angels. Some of the papers presented at FUR-82 have been published by Reidel in 1983 in a volume edited by Stigum and Wenst0p. The present volume contains com­ mentaries on a number of the papers presented at the conference together with broader outlines of current views on the theory. The observation that utility and risk theory now appears to be in a state of rapid change has prompted us to choose the title PROGRESS IN UTILITY AND RISK THEORY for the book, in the belief that science always moves from poorer to more advanced paradigms or from weaker to more forceful theories. In other words, change is usually progress, even though intermediate stages in a para­ digm shift may be bewildering, to say the least.