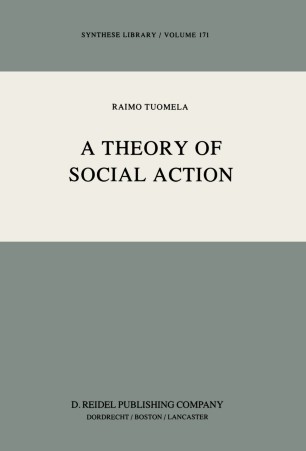 A Theory of Social Action

It is somewhat surprising to find out how little serious theorizing there is in philosophy (and in social psychology as well as sociology) on the nature of social actions or joint act. hons in the sense of actions performed together by several agents. Actions performed by single agents have been extensively discussed both in philosophy and in psycho~ogy. There is, ac­ cordingly, a booming field called action theory in philosophy but it has so far strongly concentrated on actions performed by single agents only. We of course should not forget game theory, a discipline that systematically studies the strategic interac­ tion between several rational agents. Yet this important theory, besides being restricted to strongly rational acting, fails to study properly several central problems related to the concep­ tual nature of social action. Thus, it does not adequately clarify and classify the various types of joint action (except perhaps from the point of view of the agents' utilities). This book presents a systematic theory of social action. Because of its reliance on so-called purposive causation and generation it is called the purposive-causal theory. This work also discusses several problems related to the topic of social action, for instance that of how to create from this perspective the most central concepts needed by social psychology and soci­ ology. While quite a lot of ground is covered in the book, many important questions have been left unanswered and many others unasked as well.