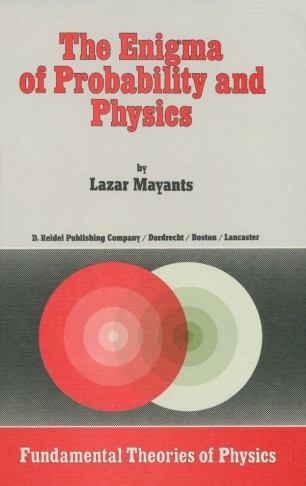 The Enigma of Probability and Physics

Lazar Mayants is a recent Russian emigre noted for his work in theoretical physics. He was previously a professor at several universities of the Soviet Union and a distinguished member of the Academy of Sciences of the U.S.S.R, where he worked for about 30 years. In this book he presents a unique, extremely detailed, and embracive version of a subject that has suffered for a long time from numerous internal imperfections. His approach is new and original, the material covered features not only the foundations of the science of probability but also most of its applications, including statistical and quantum mechanics. The key methodolOgical principle underlying the book is of extraordinary significance and deserves special attention. The treatment excels in thoroughness of presentation, in its fulness of mathe­ matical detail and the abundance of physical examples. The book is intended for a wide range of people interested in probability and its connection with modern science. It is written as a text for advanced students, and I predict that a reader who masters all its contents will become an expert in the subject of both prob­ ability and its physical implications, while enjoying its understanding and use. HENRY MARGENAU Veritas nihil veretur nisi abscondi (truth 'What tremendously easy riddles you ask!' Humpty Dumpty growled out. fears nothing except being hidden). Latin proverb Lewis Carroll, Through the Looking Glass, Chap. 6. Preface The history of producing this book is rather complicated and not quite usual.