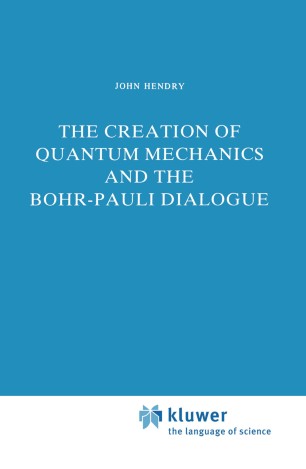 The Creation of Quantum Mechanics and the Bohr-Pauli Dialogue

Part of the Studies in the History of Modern Science book series (SHMS, volume 14)

Many books have been written on the history of quantum mechanics. So far as I am aware, however, this is the first to incorporate the results of the large amount of detailed scholarly research completed by professional historians of physics over the past fifteen years. It is also, I believe, the first since Max Jammer's pioneering study of fifteen years ago to attempt a genuine 'history' as opposed to a mere technical report or popular or semi-popular account. My aims in making this attempt have been to satisfy the needs of historians of science and, more especially, to promote a serious interest in the history of science among phYSicists and physics students. Since the creation of quantum mechanics was inevitably a technical process conducted through the medium of technical language it has been impossible to avoid the introduction of a large amount of such language. Some acquaintance with quantum mechanics, corresponding to that obtained through an undergraduate physics course, has accordingly been assumed. I have tried to ensure, however, that such an acquaintance should be sufficient as well as necessary, and even someone with only the most basic grounding in physics should be able with judicious skip­ ping, to get through the book. The technical details are essential to the dialogue, but the plot proceeds and can, I hope, be understood on a non­ technical level.