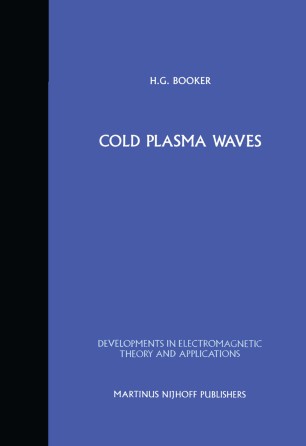 Part of the Developments in Electromagnetic Theory and Applications book series (DETA, volume 2)

The book aims to present current knowledge concerning the propagation of electro­ magnetic waves in a homogeneous magnetoplasma for which temperature effects are unimportant. It places roughly equal emphasis on the radio and the . hydromagnetic parts of the electromagnetic spectrum. The dispersion properties of a magnetoplasma are treated as a function both of wave frequency (assumed real) and of ionization density. However, there is little discussion of propagation in a stratified medium, for of collisions is included only which reference may be made to Budden [1] . The effect in so far as this can be done with simplicity. The book describes how pulses are radiated from both small and large antennas embedded in a homogeneous magneto­ plasma. The power density radiated from a type of dipole antenna is studied as a function of direction of radiation in all bands of wave frequency. Input reactance is not treated, but the dependence of radiation resistance on wave frequency is described for the entire electromagnetic spectrum. Also described is the relation between beaming and guidance for Alfven waves.