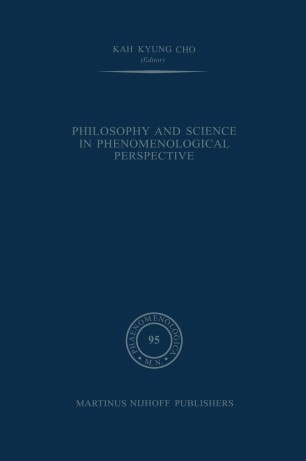 The articles included in this volume originate from contributions to the International Conference on Philosophy and Science in Phenomenologi­ cal Perspecllve, held in Buffalo in March 1982. The occasion had been to honor the late Professor Marvin Farber, a long time distinguished member of the Department of Philosophy, State University of New York at Buffalo. and the Founding Editor of the journal, Philosophy and Phenomenological Research. Many of the papers were subsequently rewritten, expanded or other­ wise edited to be published in the series Phaenomenoiogica. The articles lIy Professor Frings and Professor Rotenstreich had not been presented at the conference, although they were originally invited papers. We regret that not all papers submitted to the conference, including com­ ments, could be accommodated in this volume. Nonetheless, our sincere gratitude is due to all participants who have made the conference a memorable and worthy event. nt of Philosophy, State University of New York at The Departme Buffalo, as the sponsor of the conference, wishes to acknowledge the grants from the Conferences in the Disciplines Program, Conversations in the Disciplines Program, and the International Studies of the State University of New York at Buffalo, as well as for a grant from the National Endowment for the Humanities. The International Phenomenological Society, with Professor Roderick Chisholm succeeding Marvin Farber as its president, co-sponsored the conference.