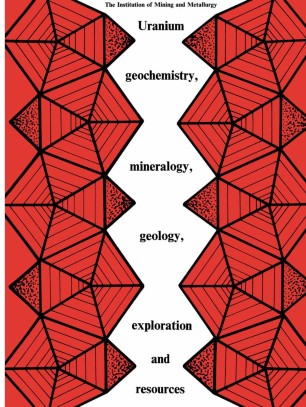 turning points that, in the course of a few years, have made this The uranium minerals that today are at the centre of worldwide metal an essential raw material. attention were unknown until 1780, when Wagsfort found a First, the destructive property of fission reactions made uranium a metal of fundamental strategic importance, increas­ pitchblende sample in 10hanngeorgenstadt. This discovery passed unnoticed, however, since Wags fort thought that it ing research in some nations, but the revolution came with the plan for the real possibility of utilizing chain reactions for contained a black species of a zinc mineral-hence the n':lme 'pitchblende' (= pitch-like blende). Seven years later, Klaproth, energy production in place of conventional fuels. while examining the mineral, noted that it contained an oxide Since that time a 'uranium race' has been in progress in many countries-often justified by the well-founded hope of of an unknown metal, which he called 'uranium' in honour of the planet Uranus, recently discovered by Herschel. Klaproth becoming self-sufficient with regard to energy, or at least of also believed that he had separated the metal, but, in fact, the paying off a part of the financial deficit due to increasing fuel imports.