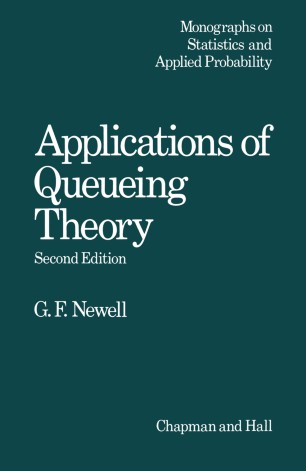 Part of the Monographs on Statistics and Applied Probability book series (EMISS, volume 4)

The literature on queueing theory is already very large. It contains more than a dozen books and about a thousand papers devoted exclusively to the subject; plus many other books on probability theory or operations research in which queueing theory is discussed. Despite this tremendous activity, queueing theory, as a tool for analysis of practical problems, remains in a primitive state; perhaps mostly because the theory has been motivated only superficially by its potential applications. People have devoted great efforts to solving the 'wrong problems. ' Queueing theory originated as a very practical subject. Much ofthe early work was motivated by problems concerning telephone traffic. Erlang, in particular, made many important contributions to the subject in the early part of this century. Telephone traffic remained one of the principle applications until about 1950. After World War II, activity in the fields of operations research and probability theory grew rapidly. Queueing theory became very popular, particularly in the late 1950s, but its popularity did not center so much around its applications as around its mathematical aspects. With the refine­ ment of some clever mathematical tricks, it became clear that exact solutions could be found for a large number of mathematical problems associated with models of queueing phenomena. The literature grew from 'solutions looking for a problem' rather than from 'problems looking for a solution.