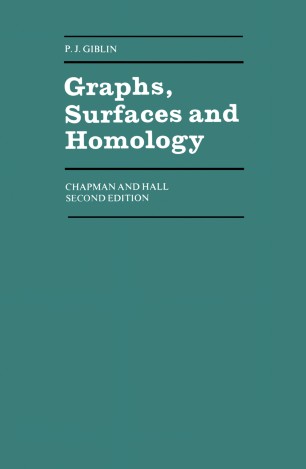 An Introduction to Algebraic Topology

viii homology groups. A weaker result, sufficient nevertheless for our purposes, is proved in Chapter 5, where the reader will also find some discussion of the need for a more powerful in­ variance theorem and a summary of the proof of such a theorem. Secondly the emphasis in this book is on low-dimensional examples the graphs and surfaces of the title since it is there that geometrical intuition has its roots. The goal of the book is the investigation in Chapter 9 of the properties of graphs in surfaces; some of the problems studied there are mentioned briefly in the Introduction, which contains an in­ formal survey of the material of the book. Many of the results of Chapter 9 do indeed generalize to higher dimensions (and the general machinery of simplicial homology theory is avai1able from earlier chapters) but I have confined myself to one example, namely the theorem that non-orientable closed surfaces do not embed in three-dimensional space. One of the principal results of Chapter 9, a version of Lefschetz duality, certainly generalizes, but for an effective presentation such a gener- ization needs cohomology theory. Apart from a brief mention in connexion with Kirchhoff's laws for an electrical network I do not use any cohomology here. Thirdly there are a number of digressions, whose purpose is rather to illuminate the central argument from a slight dis­ tance, than to contribute materially to its exposition.