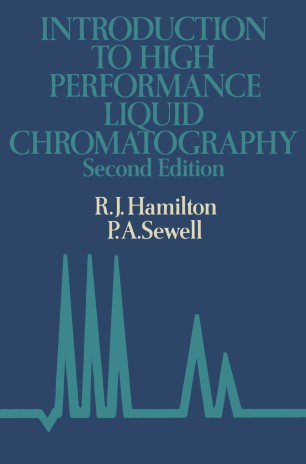 Since the first edition of this book the major advances have been in column packings, where over ninety per cent of separations are now performed using chemically bonded microparticulate packings, and in instrumentation. The use of microprocessor control has brought about a rationalization of mobile phase delivery systems and in detectors, the introduction of electrochemical and spectrophotometric detection other than in the ultra-violet region, has widened the field of applications and the sensitivity of the technique. The use of ion­ pair chromatography has increased at the expense of ion-exchange and this together with the improvements in detectors has greatly increased the appli­ cation of the technique in the biomedical field. These advances are described together with the established methods to enable the beginner to carry out a satisfactory separation and to gain the experience necessary for the full exploitation of the technique. R. J. Hamilton P. A. Sewell Liverpool,1981 1 Introduction to high performance liquid chromatography 1. 1 Introduction Chromatography in its many forms is widely used as a separative and an analytical technique. Gas chromatography since its introduction by James and Martin [1] has been pre-eminent in the field. Uquid chromatography in the of paper, thin-layer, ion-exchange, and exclusion (gel permeation and gel form filtration) chromatography had not been able to achieve the same success, mainly because of the poor efficiences and the long analysis times arising from the low mobile phase flow rates.