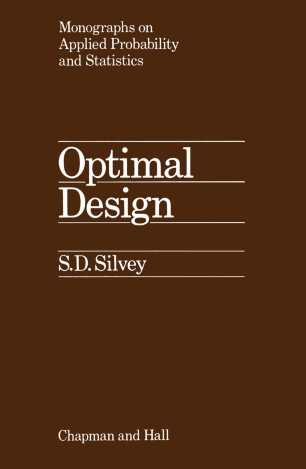 An Introduction to the Theory for Parameter Estimation

Part of the Monographs on Applied Probability and Statistics book series (EMISS, volume 1)

Prior to the 1970's a substantial literature had accumulated on the theory of optimal design, particularly of optimal linear regression design. To a certain extent the study of the subject had been piecemeal, different criteria of optimality having been studied separately. Also to a certain extent the topic was regarded as being largely of theoretical interest and as having little value for the practising statistician. However during this decade two significant developments occurred. It was observed that the various different optimality criteria had several mathematical properties in common; and general algorithms for constructing optimal design measures were developed. From the first of these there emerged a general theory of remarkable simplicity and the second at least raised the possibility that the theory would have more practical value. With respect to the second point there does remain a limiting factor as far as designs that are optimal for parameter estimation are concerned, and this is that the theory assumes that the model be collected is known a priori. This of course underlying data to is seldom the case in practice and it often happens that designs which are optimal for parameter estimation allow no possibility of model validation. For this reason the theory of design for parameter estimation may well have to be combined with a theory of model validation before its practical potential is fully realized. Nevertheless discussion in this monograph is limited to the theory of design optimal for parameter estimation.