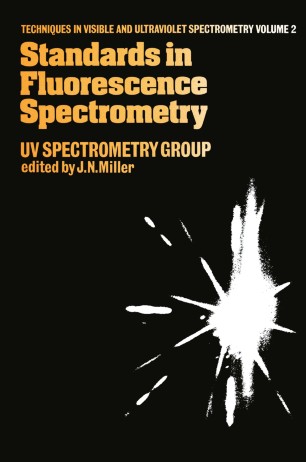 Part of the Techniques in Visible and Ultraviolet Spectometry book series (TVUS, volume 2)

The Photoelectric Spectrometry Group was formed in July 1948 in Cambridge. The Group was born out of a need for a forum of users to discuss problems and methodology associated with the new era of photoelectric spectrometers. Over the years the aims and objectives of the Group have been broadened to include many aspects of ultraviolet and visible spectrometry. In 1973, the Group renamed itself the UV Spectrometry Group (UVSG). The techniques of fluorescence, diffuse reflectance, ORD and CD were included in the Group's interest. In 1979, the UVSG became a registered charity. The present Group membership is some 200 practising spectroscopists, mostly from the UK with a small but growing overseas membership. In August 1977, the UVSG Committee set up three Working Parties: Cells for UV-Visible Spectrophotometers; Photometric and Wavelength Standards; and the Calibration of Fluorimeters. It was felt that a wealth of information and expertise in the practice of spectrometry was available within the Group and that it was appropriate for this to be gathered together in the form of a number of monographs. Initially the intention was that these should be circulated only amongst the Group membership. However, the suggestion was made that these monographs would be of interest to other scientists outside our specialist Group. The conclusions of the first two Working Parties were combined in Volume 1 of this series, and this monograph summarizes the work of the third Working Party.