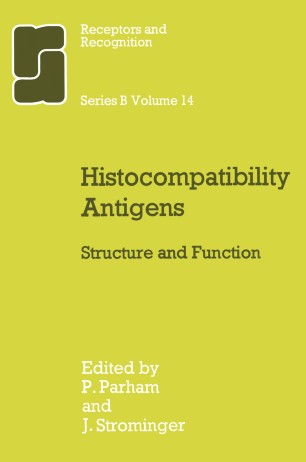 Part of the Receptors and Recognition book series (WOCS)

The Major Histocompatibility Complex (MHC) was discovered as a con­ sequence of the chronic problem encountered by cancer biologists in the early years of this century: the failure to maintain tumor lines by serial passage in outbred mice. A number of observations pointed to genetic similarity being a prerequisite for successful transplantation and they were incorporated into a genetic theory of transplantation by C.C. Little. This prompted scientists like Little to initiate breeding experiments designed to test his hypothesis and produce genetically identical mice which would permit the growth of trans­ planted tumors. Most inbred strains of mice commonly used in immunology derive from those efforts. Transplantation of normal tissues obeyed the same rules found for malignant tissues and rejection was shown to be an immunological phenomenon. G.D. Snell showed that a single genetic locus determined rapid rejection of skin grafts. This was initially called the Major Histocompatibility Locus but was subsequently shown to include many functionally related genes and renamed the Major Histocompatibility Complex (MHC). In mouse this is the H-2 complex and man the HLA complex. During this same period P.A.