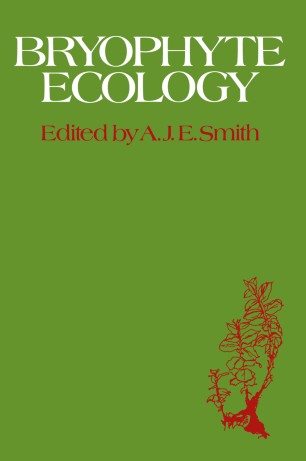 There has been an increasing interest in bryophyte ecology over the past 100 or so years, initially of a phytosociological nature but, additionally, in recent years, of an experimental nature as well. Early studies of bryophyte communities have led to detailed investigations into the relationships between the plants and their environment. Ecological papers, the large number of which is evidenced by the length of the bibliographies in the subsequent chapters, have appeared in numerous journals. Yet, apart from review chapters, by H. Gams and P. W. Richards in Manual of Bryology, edited b:; H. Verdoorn in 1932 and chapters in E. V. Watson's Structure and Life of Bryophytes, Prem Puri's Bryophytes - A Broad Perspective and D. H. S. Richardson's The Biology of Mosses, published in 1972,1973 and 1981 respectively, no general accounts of bryophyte ecology have been published. Although the Bryophyta is a relatively small division of plants, with between 14000 and 21000 species the interest that they have aroused is out of all proportion to the size either of the plants or of the division. It is evident, however, that despite their relative insigni­ ficance they play an important ecological role, especially in extreme environments and, in the case of bryophytes in tropical cloud forests and of Sphagnum, may even be a dominant factor in the ecology of the area concerned.