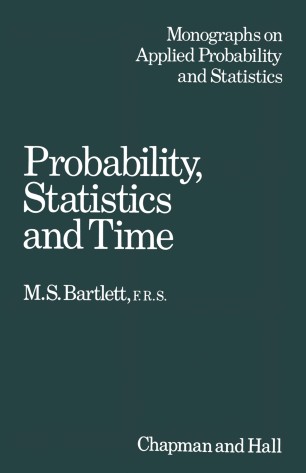 A collection of essays

Some years ago when I. assembled a number of general articles and lectures on probability and statistics, their publication (Essays in Probability and Statistics, Methuen, London, 1962) received a some­ what better reception than I had been led to expect of such a miscellany. I am consequently tempted to risk publishing this second collection, the title I have given it (taken from the first lecture) seeming to me to indicate a coherence in my articles which my publishers might otherwise be inclined to query. As in the first collection, the articles are reprinted chronologically, usually without comment. One exception is the third, not previously published and differing from the original spoken version both slightly where indicated in the text and by the addition of an Appendix. I apologize for the inevitable limitations due to date, and also for any occasional repetition of the discussion (e.g. on Bayesian methods in statistical inference). In particular, readers technically interested in the classification and use of nearest-neighbour models, a topic raised in Appendix II of the fourth article, should also refer to my monograph The Statistical Analysis of Spatial Pattern (Chapman and Hall, London, 1976), where a much more up-to-date account of these models will be found, and, incidentally, a further emphasis, if one is needed, of the common statistical theory of physics and biology. March 1975 M.S.B.