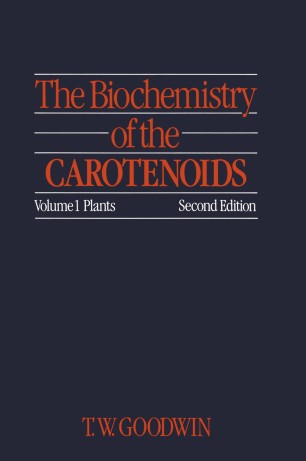 The Biochemistry of the Carotenoids

The carotenoids are not only amongst the most widespread of the naturally occurring groups of pigments, but probably also have the most varied functions; witness their known roles in photokinetic responses of plants, in phototropic responses of fish and as vitamin A precursors in mammals and birds. Pigments with such wide distribution and such diverse functions are obviously of great interest to biological scientists with very different specializa­ tions, especially as it is unlikely that the study of the functions of carotenoids is anywhere near complete. The primary aim of the present work is to discuss the distribution, bio­ genesis and function of the carotenoids throughout the plant and animal kingdoms in such a way that, because of, rather than in spite of its bio­ chemical bias, it will be of value to workers interested in all the biological aspects of these pigments. The biochemical approach is considered the most effective because, generally speaking, most progress in the study of carotenoids in living material has been achieved using biochemical techniques, be they applied by zoologists, botanists, entomologists, microbiologists or other specialists; what is even more important is that a consideration of the present position makes it certain that further fundamental progress will also be made along biochemical lines.