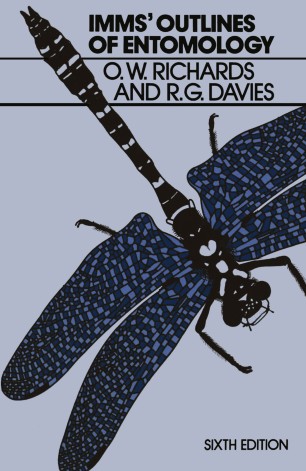 In his preface to early editions of this book, the late Dr. A. D. Imms said that he intended it to be an elementary account of entomology as a branch of general biology. He had especially in mind the needs of university students of zoology and agriculture, as well as those intending later to specialize in entomology, and he suggested that the book might also interest teachers of advanced biology'in schools. These general aims and the balance between the different aspects of the subject have changed little in this and in our previous revision. We have, however, tried to bring the present edition up to date on the lines of our revised tenth edition of Imms' General Textbook of Entomology, published in 1977. The text has been entirely re-set and eleven illustrations have been replaced by new figures. The same orders . of insects are recognized as in the last edition, but the sequence in which the Endopterygote groups appear has been changed to reflect more accurately their probable evolutionary relationships. Many small changes and some addi­ tions have been made in the physiological sections, the chapter on the origin and phylogeny of insects has been rewritten, and a new bibliography provides a selection of modern references for the in­ tending specialist. It has been our object to make these alterations without materially increasing the length of the book or its level of difficulty.