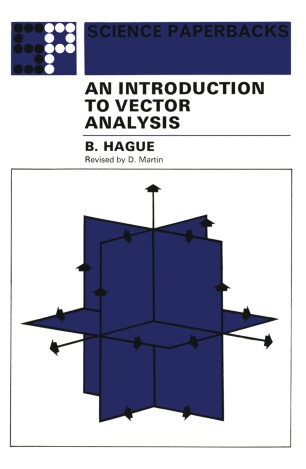 An Introduction to Vector Analysis For Physicists and Engineers

The principal changes that I have made in preparing this revised edition of the book are the following. (i) Carefuily selected worked and unworked examples have been added to six of the chapters. These examples have been taken from class and degree examination papers set in this University and I am grateful to the University Court for permission to use them. (ii) Some additional matter on the geometrieaI application of veetors has been incorporated in Chapter 1. (iii) Chapters 4 and 5 have been combined into one chapter, some material has been rearranged and some further material added. (iv) The chapter on int~gral theorems, now Chapter 5, has been expanded to include an altemative proof of Gauss's theorem, a treatmeot of Green's theorem and a more extended discussioo of the classification of vector fields. (v) The only major change made in what are now Chapters 6 and 7 is the deletioo of the discussion of the DOW obsolete pot funetioo. (vi) A small part of Chapter 8 on Maxwell's equations has been rewritten to give a fuller account of the use of scalar and veetor potentials in eleetromagnetic theory, and the units emploYed have been changed to the m.k.s. system.