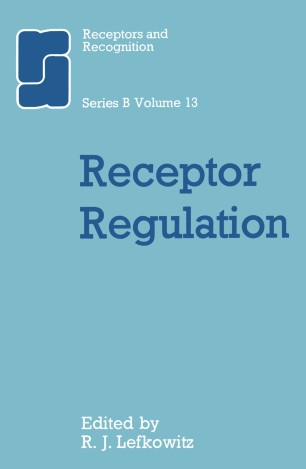 Part of the Receptors and Recognition book series (WOCS)

ROBERT J. LEFKOWITZ, M. D. Receptor Regulation (Receptors and Recognition, Series B, Volume 13) Edited by R. J. Lefkowitz Published in 1981 by Chapman and Hall, 11 New Fetter Lane, London EC4P 4EE © 1981 Chapman and Hall The study of hormone and drug receptors has become one of the most excit­ ing and rapidly moving areas of biomedical research. Elucidation of receptor mechanisms and receptor structure has become the common goal of many scientists from diverse backgrounds. The rapid advances achieved have been due, in large part, to the concentrated effort of workers from a variety of disciplines including classical pharmacology, biochemistry, endocrinology, cell biology, genetics' and molecular biology, among others. Hormone and drug receptors appear to be of three major types, which may be classified by their cellular locations. Found in the plasma membranes of cells are the receptors for a wide variety of polypeptide hormones, catecholamines and a variety of neurotransmitters. Included within this group are those receptors coupled to the enzyme adenylate cyclase. The second group of receptors are the soluble cytoplasmic receptors for the steroid hormones. A third type of hormone receptor is the receptor for the thyroid hormones which appears to be confined to the nucleus. Not only may these different types of receptor be distinguished in terms of their cellular locations but also by their mechanisms of action.