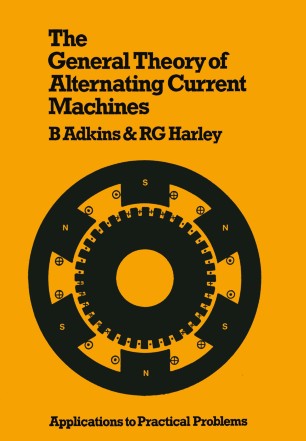 The book on The General Theory of Electrical Machines, by B. Adkins, which was published in 1957, has been well received, as a manual containing the theories on which practical methods of calculating machine performance can be based, and as a text-book for advanced students. Since 1957, many important developments have taken place in the practical application of electrical machine theory. The most important single factor in the development has been the increasing availability of the digital computer, which was only beginning to be used in the solution of machine and power system problems in 1957. Since most of the recent development, particularly that with which the authors have been concerned, has related to a. c. machines, the present book, which is in other respects an up-to-date version of the earlier book, deals primarily with a. c. machines. The second chapter on the primitive machine does deal to some extent with the d. c. machine, because the cross-field d. c. generator serves as an introduction to the two-axis theory and can be used to provide a simple explanation of some of the mathematical methods. The equations also apply directly to a. c. commutator machines. The use of the word 'general' in the title has been criticized. It was never intended to imply that the treatment was comprehen­ sive in the sense that every possible type of machine and problem The word is used in the sense that the theory can was dealt with.