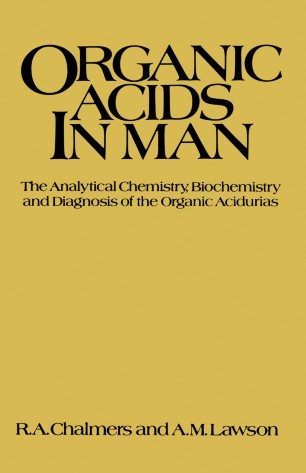 Analytical Chemistry, Biochemistry and Diagnosis of the Organic Acidurias

The writing of this book was prompted by the need for a comprehensive of current data on organic acids suitable for both newcomers and collection established researchers in this field. The only previous text of the kind was the excellent review by Nordmann and Nordmann (1961), and at that time the main method of analysis was paper chromatography with liquid chromatography being used in a limited way. Only three diseases in which organic acids accumulate were known (primary hyperoxaluria, phenylketonuria and alcaptonuria). Since then, with the development of gas chromatography and mass spectrometry, and the further development ofliquid chromatography, knowledge concerning the nature of the organic acids in physiological fluids has been greatly extended. At the same time, the number of organic acidurias has increased dramatically, there being now some 40-50 known diseases of this type. During the past 15 years or so, there have been several reviews, dealing with either specific diseases or groups of diseases (Gompertz, 1972, 1974; Tanaka, 1975), or presenting the proceedings of symposia (Stern and Toothill, 1972) or workshops (Marner et al. , 1974). This present text deals comprehensively and in detail with the organic acids in human physiological fluids in health and in disease states, and is particularly concerned with the methods necessary for their separation, determination and indentification.