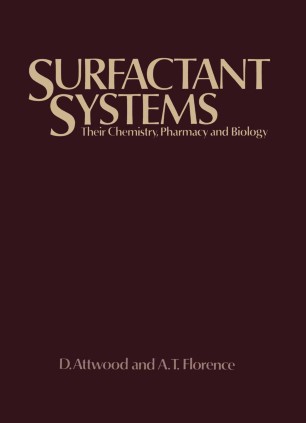 Their chemistry, pharmacy and biology

It is now twelve years since Solubilization by Surface-Active Agents appeared. Since the publication of that monograph the subject has expanded rapidly as the unique potential of surfactants has become known to a wider circle of scientists. In a recent review Menger (Accounts of Chemical Research, 12 (1979) 111) estimated that since 1970 there have been over 2800 publications on micelles and micellization alone. The topic of catalysis in micellar media was in an early stage of development in 1968 but the growth in this subject has given rise to an excellent textbook by Fendler and Fendler. We have felt for some time that a revision of Solubilization by Surface-Active Agents was overdue. The book has been out of print for some time. Owing to pressure of other work, Professor P. H. Elworthy and Dr C. B. Macfarlane were unable to undertake the work of revision but while working together on an undergraduate textbook the present authors decided to set to work, realizing both the impossibility of producing a comprehensive textbook and the need to alter the scope of the book. Micellar solubilization occurs over a relatively small surfactant concentration range; because of this and because the phenomenon is never observed in isolation, we have extended the text to include surface activity, emulsions and suspensions and, as our emphasis is on formulation of medicinal products, to the of the toxicology of surface-active agents.