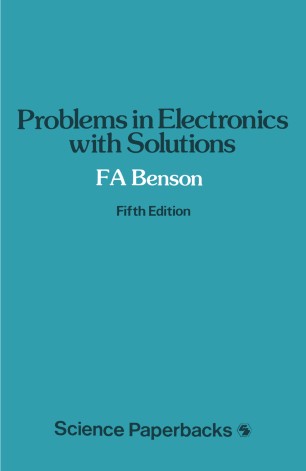 Problems in Electronics with Solutions

Many changes have been made in this edition, first to the nomenclature so that the book is in agreement with the International System of Units (S. I. ) and secondly to the circuit diagrams so that they conform to B. S. S. 3939. The book has been enlarged and now has 546 problems. Much more emphasis has been given to semiconductor devices and transistor circuits, additional topics and references for further reading have been introduced, some of the original problems and solutions have been taken out and several minor modifications and corrections have been made. It could be argued that thermionic-valve circuits should not have been mentioned since valves are no longer considered important by most electronic designers except possibly for very high power or voltage applications. Some of the original problems on valves and valve circuits have been retained, however, for completeness because the material is still present in many syllabuses and despite the advent and prolification of solid-state devices in recent years the good old-fashioned valve looks like being in existence for a long time. There are still some topics readers may expect to find included which have had to be omitted; others have had less space devoted to them than one would have liked. A new feature of this edition is that some problems with answers, given at the end of each chapter, are left as student exercises so the solutions are not included. The author wishes to thank his colleagues Professor P. N.