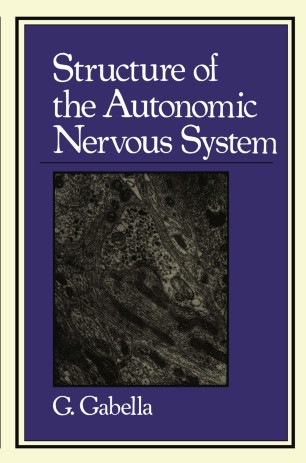 Structure of the Autonomic Nervous System

A conspicuous portion of the peripheral nervous system is part of the 'vegetative nervous system'; it includes all the neurons which innerv­ ate the viscera, salivary and lacrimal glands, the heart and blood vessels, all other smooth muscles of the body, notably the intrinsic muscles of the eye and the muscles of the hair. Only part of the system belongs to the peripheral nervous system: it has also its own nuclei and pathways in the central nervous system. The distinction between visceral and somatic functions is a very old one in our culture. With the development of neurology the notion of a widespread nervous control of body functions emerged. Winslow (1732) used the term nervi sympathici majores for those nerves, which he thought to carry about 'sympathies' and then co­ ordinate various viscera's functions. His was an anatomical break­ through, which obscured Willis' 'intercostal nerve' and Vesalius 'cranial nerve'. The notion was developed among others by John­ stone (1764) who arrived, with the aid of some very accurate anatomical observations, at the problem of the nervous influence on motion and sensitivity of viscera. By the end of the eighteenth century, it was clear, with Bichat (1800), that what he called 'sympa­ thetic nervous system' (and his pupil Reil, a few years later, 'vegeta­ tive nervous system ') controlled visceral functions (fa vie organique), whereas somatic functions (fa vie animafe) were under direct control from the brain and spinal cord.