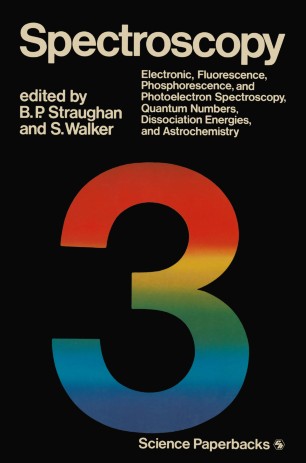 It is fifteen years since Walker and Straw wrote the first edition of 'Spectroscopy' and considerable developments have taken place during that time in all fields of this expanding subject. In atomic spectroscopy, for example, where the principles required in a student text have been laid down for many years, there have been advances in optical pumping and double resonance which cannot be neglected at undergraduate level. In addition, nuclear quadrupole resonance (n.q.f.) and far infrared spectroscopy now merit separate chapters while addtional chapters dealing with Mbssbauer spectroscopy, photoelectron spectroscopy and group theory are an essential requisite for any modern spectroscopy textbook. When the idea for a new edition of Spectroscopy was first discussed it quickly became clear that the task of revision would be an impossible one for two authors working alone. Consequently it was decided that the new edition be planned and co-ordinated by two editors who were to invite specialists, each of whom had experience of presenting their subject at an undergraduate level, to contribute a new chapter or to revise extensively an existing chapter. In this manner a proper perspective of each topic has been provided without any sacri­ fice of the essential character and unity of the first edition. The expansion of subject matter has necessitated the division of the complete work into three self contained volumes. Volume I includes atomic, n.m.f., n.q.f., e.s.r. and Mbssbauer spectroscopy.