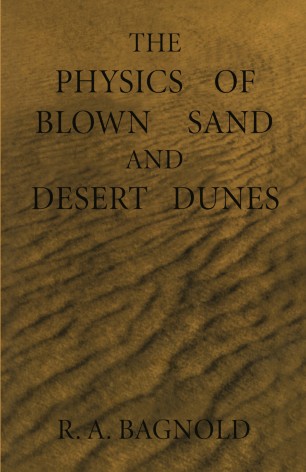 The Physics of Blown Sand and Desert Dunes

THE NATURE OF THE PROBLEM THIS book results from an attempt to explain on a basis of experimental physics some of the many strange phenomena produced by the natural movement of sand over the dry land of the Earth. The subject is but one aspect of a far wider problem which is still very imperfectly grasped-the transport of solid particles of any kind by fluids in general. Here the difficulty has been, and still is, that no one branch of science has attempted to deal with the problem as a whole, or to co-ordinate the vast amount of piecemeal work by students of different outlook in many unrelated fields. The carriage of silt by rivers has received a great deal of attention from engineers. But owing to the difficulties of direct measurement, to the expense and labour of conducting full-scale experiments, and to a failure to find agreement as to the basic quantities upon which a theoretical edifice may be built, the published results are far from satisfactory. Little has emerged except empirical formulae; and these are rarely capable of reliable application to conditions other than those under which they were evolved. The drifting of snow is of direct interest to transport authorities in many countries, to meteorologists engaged in the study of rainfall, to ski-runners and to mountaineers. Yet no means has been found whereby the precipitation can be gauged, or the rate of drift related to the strength of the wind.