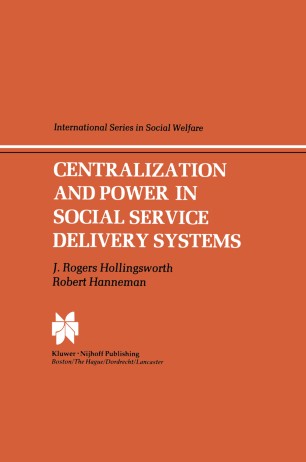 The Cases of England, Wales, and the United States

In the United States and other western nations, debates rage over whether welfare, medical care, educational programs, and many other aspects of public policy should be the responsibility of central govern­ ment, local government, or the private sector. In most nations, the issues of regional autonomy and decentralization are constantly in the news, with intensity varying from mild debate to open warfare. Less visibly, battles are continuously fought in the political arena over what groups should have the right to make decisions concerning the allocation of soci­ ety's resources. In response to these concerns, social scientists have focused consider­ able attention on the causes and consequences of centralization and de­ centralization in political, economic, and social organizations. Their analyses of centralization have been varied, ranging from systems that are quite small (e. g. , the family, the firm, and the community) to those sys­ tems that are very large (e . g. , the welfare state). While centralization is a concept of major concern in most of the social science disciplines, each discipline has tended to focus on centralization with a different set of interests. Economists have been very much concerned with the causes and the consequences of the concentration of economic resources. Polit­ ical scientists have long sought to understand the origins and conse­ quences of dictatorship and democracy. Sociologists have focused on inequalities in the distribution of power.