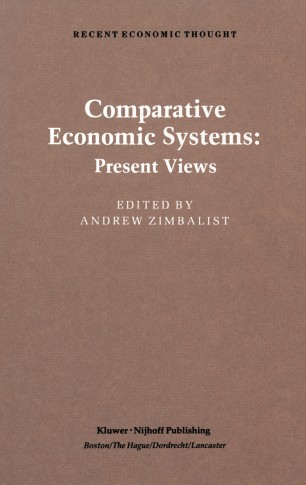 An Assessment of Knowledge, Theory and Method

3 edge, methods and theory. I turn now to some of my own reflections on this score. Some Reflections My first proposition is that if we are interested in analyzing the performance and dynamic properties of the world's economies, it is only at significant peril that comparative economists can overlook noneconomic or "political" factors. This is not to say that it is illegitimate to abstract from non-economic factors for particular purposes; rather, such abstraction should occur only with cogni­ zance of the influences being suppressed. I have argued elsewhere that the analytical compromise in suppressing noneconomic variables is greater for the study of planned than for market economies. [7] Borrowing from Polanyi [8], it is claimed that in market sys­ tems the economic sphere is disembedded from (separate and not subordinate to) the political, social and cultural spheres, while in planned systems the economic sphere is embedded in the noneconomic spheres. To be sure, market economies are strongly affected by political and cultural factors, but planned economies have and often exercise the potential to let political goals dominate in making production, allocational, or distributional choices. Indeed, it is difficult in practice to separate out what are political and what are economic decisions in planned systems.